The road that Winnipeg Jets forward Tanner Glass[1] took to the National Hockey League is not the typical dusty lane that most small-town Saskatchewan boys ride.

With his style of play you would expect Tanner to work his way through the junior hockey ranks of the Western Hockey League to find himself in an NHL role. Instead, with a smile on his face, gritty determination, and a beautiful mind he put on his boots and went to work.

“The NHL was always a goal in the back of my mind, but I had other goals along the way,” explains Glass. “One of those goals was to get my education paid for through hockey, so the best way to do that was to play Junior ‘A’ and try to get a scholarship.”

Growing up on an acreage five miles outside the small town of Craven, Saskatchewan, a community of about 200, leads to a unique upbringing. “You learn how to spend a lot of time with your brother and sister. When the bus drops you off after school, you get your imagination going, because there isn’t a lot of things to do,” remembers Glass, but he wouldn’t trade that childhood for anything. “It was a great place to grow up. There are good people on the prairies, as people and Winnipeg know. I really enjoyed growing up in ‘Small-Town Saskatchewan’.”

Young Tanner had to fight to have his hockey abilities recognized. “I was never the best player on my team growing up; I never played in the best leagues,” said Glass. “When I was 14, 15, 16, there was some interest from some WHL teams, but nothing where I thought I was going to be an important player on the team.”

Playing for a WHL team would also jeopardize his chance to get his education paid for through hockey. Due to transfer rules, WHL players are ineligible to play for American College teams that are members of the NCAA. The WHL option would limit Tanner’s choices to Canadian schools after his junior career.

Keeping his options open, Tanner made the move to the British Columbia Hockey League, a Junior ‘A’ hockey league. Glass played a year and a half with the Penticton Panthers before finishing the 2002-03 season with the Nanaimo Clippers. Glass finished his BCHL career with 34 goals, 67 assists and 325 penalty minutes in 107 games played. 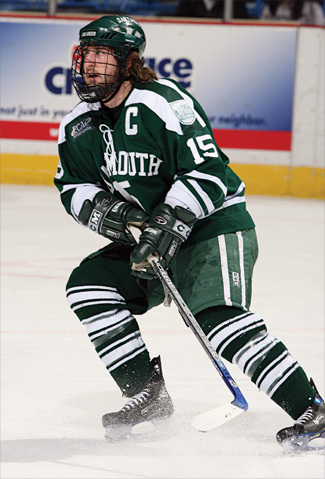 From Nanaimo, Tanner’s hockey career took an interesting turn. He was recruited to play hockey at Dartmouth College, an Ivy League university based in rural New Hampshire.

Tanner had committed to play for the Dartmouth Big Green, when he got a call from Rick Dudley, the General Manager of the Florida Panthers the day before the 2003 NHL Entry Draft. “He asked if I was interested in playing pro hockey. I thought that was maybe one of the stupidest questions anybody had ever asked me. Obviously I was interested,” recalls Glass. “He told me there was no guarantee, but we may talk tomorrow.”

The next day the Florida Panthers selected Tanner Glass[2] in the ninth round, 265th overall at the 2003 NHL Entry Draft. “I got the call the next day,” says Glass, “He (Rick Dudley) said ‘we took a chance on you with our last pick of the draft. We think you can play in this league one day if you keep on the track you’re on right now.”

Tanner continued on that track, playing four seasons with the Big Green. “I went there for four years and got a history degree, the history of imperialism. I had a great time; it’s a great school.”

His time at Dartmouth played an integral role in his development as a hockey player, “At school you have a lot of time to practice and work on your game, you only play on the weekends, so a lot of practice time, a lot of time to get bigger and stronger,” explains Glass. “A key part of my development was that time to grow in the weight room, and to learn the game.”

Glass moved up to the professional ranks following his college career, bouncing between the Florida Panthers and their AHL affiliate, the Rochester Americans for two seasons.

In the summer of 2009 Tanner Glass[3] signed as a free agent with the Vancouver Canucks. The hope was to have him spend some time playing with the Manitoba Moose, but Glass carved out a spot on the Canucks’ fourth line. 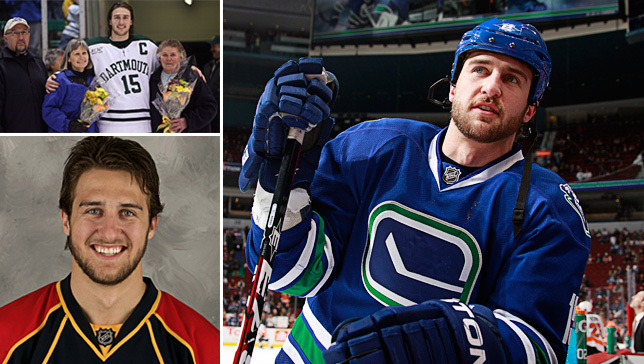 “Personally, I never expected to be here (Manitoba Moose), but when I signed with Vancouver and I was trying to get the sticks I wanted for camp, they put me in touch with Jay McMaster who was the equipment manager of the Moose, so I kinda took the hint there that maybe they didn’t have me marked in Vancouver’s lineup,” remarks Glass. “I didn’t really think about that at all, I was just focused on making the Canucks. I knew where the minor hockey team was, and I knew Manitoba was a good place to play, but I was always focused on trying to make Vancouver.”

With the Canucks, Tanner Glass[4] had the opportunity to play on an incredibly talented team, and establish his role as a high-energy player. His time in Vancouver culminated with the 2011 Stanley Cup run.

“There was never a point in the season that I doubted the fact that we were going to be in the Final and then win the Stanley Cup,” says Glass. “It was a great ride, and we had a great team.”

Following that incredible run, he made his mark again by becoming one of the first free agents signed by the Winnipeg Jets in the summer of 2011. “With the excitement around the team, I just jumped at the chance to be a part of something special here,” explains Glass. 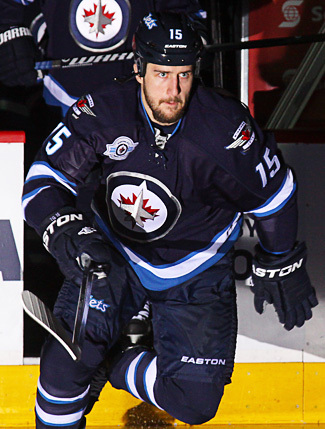 With the Jets, Glass continues to make his mark, and head coach Claude Noel has been impressed with his play. “He’s playing a really big role, same with Slater and Thorburn, they look like they are fitting into that third hole,” praised Claude Noel. “The fact that they fit into that third line and I’ve been able to use them as dependable checkers really helps us. They make a really huge difference. It’s a big help for us; they’ve done a great job.”

Tanner Glass[5] explained how he has been able to make a difference with the Jets. “I just try to bring a physical element every night and be really sound defensively. If you can establish those two things, those are the things that are going to create offence for me, and change the momentum of a game.”

With a history degree under his belt, a solid upbringing, and a wealth of hockey experience, this small-town prairie boy brings a great perspective to the Jets locker room. “For me I just try to enjoy it, and I try to have fun every day, and work hard.”

“If I’m coming to the rink with a smile on my face, then getting on the ice and working hard doesn’t feel like work. We’re obviously very fortunate to play in Winnipeg, and I just try to enjoy it every day.”

Acquire this Domain
You can acquire this site’s domain name! We have nurtured its online marketing value by systematically curating this site by the domain’s relevant keywords. Explore our content network – you can advertise on each or rent vs. buy the domain. Buy@TLDtraders.com | Skype: TLDtraders | +1 (475) BUY-NAME (289 – 6263). Thousands search by this site’s exact keyword domain name! Most are sent here because search engines often love the keyword. This domain can be your 24/7 lead generator! If you own it, you could capture a large amount of online traffic for your niche. Stop wasting money on ads. Instead, buy this domain to gain a long-term marketing asset. If you can’t afford to buy then you can rent the domain.

About Us
We are Internet Investors, Developers, and Franchisers – operating a content network of several thousand sites while federating 100+ eCommerce and SaaS startups. With our proprietary “inverted incubation” model, we leverage a portfolio of $100M in valued domains to impact online trends, traffic, and transactions. We use robotic process automation, machine learning, and other proprietary approaches to power our content network. Contact us to learn how we can help you with your online marketing and/or site maintenance.

The requested URL's length exceeds the capacity limit for this server.

The requested URL's length exceeds the capacity limit for this server.

This website uses cookies to improve your experience while you navigate through the website. Out of these, the cookies that are categorized as necessary are stored on your browser as they are essential for the working of basic functionalities of the website. We also use third-party cookies that help us analyze and understand how you use this website. These cookies will be stored in your browser only with your consent. You also have the option to opt-out of these cookies. But opting out of some of these cookies may affect your browsing experience.
Necessary Always Enabled
Necessary cookies are absolutely essential for the website to function properly. This category only includes cookies that ensures basic functionalities and security features of the website. These cookies do not store any personal information.
Non-necessary
Any cookies that may not be particularly necessary for the website to function and is used specifically to collect user personal data via analytics, ads, other embedded contents are termed as non-necessary cookies. It is mandatory to procure user consent prior to running these cookies on your website.
SAVE & ACCEPT
Generated by Feedzy